What amazes me about my whole health and weight loss journey is that while I have come along way from the overweight days and have learned so much, the universe never ceases to amaze me further with new discoveries all the time.

Usually these revelations don’t come out of the blue but they build up over time and if I don’t get the message in the early stages where the discomfort is minor, it gets to a major discomfort stage to get my attention. Think pain, hardship, embarrassment, whatever – it just gets worse until you do something about it.

So if you have read any of my other stuff you will know that I am addicted to certain foods. I learned that this was the case because when I would eat that certain food, all sense went out the window and I would eat it until I was sick. No amount of portion control or trying to have just one ever helped. It was an overwhelming force propelling me towards it.

The tricky part is that I wouldn’t always eat the whole thing the first time around. I might have a bit but then once the door was open to the possibility of having it, then it would plague my thoughts and I would plot and plan when to have it again and soon not only was I having it all the time, I was having it before other food or eating only this. Just completely crazy out of control as well as feeling sick and miserable.

But not all food did this to me, only some foods and the only way to beat addiction, is not to have it at all. But before you say “but that’s impossible for me,” the trick is that to substitute the food that makes you crazy with another similar one that doesn’t. And you totally don’t feel like you are missing out at all. I love it in fact because I can still have the amazing taste without all the craziness – constantly trying to hold yourself back from eating the whole packet is a nightmare – especially when you have to do it all the time, at every meal or snack or drink or whatever. Totally exhausting!

That all completely goes though when you eat the food that works for you. Your body kicks into automatic pilot, it knows when to stop eating. It’s quite brilliant once you tune in. However some weird things started to happen around a substance I have had trouble with in the past and it might be time to say good-bye to…

It is one of my crazy out of control foods and my book Lite as a Feather goes into all the stories about my ridiculous coffee addiction. My substitute for this though was tea – black tea, chai tea, camomile, peppermint and any kind of combination out there. I was willing to try them all because I love it. It is soothing, distracting, helps me determine if I am really hungry or just need a break from whatever I am doing. Helps me get my water quota in for the day, (non-caffeinated types do.) All marvellous. Love Tea. (All except any with flavouring in it because even if it says natural flavour, it instantly gives me a headache.)

So all has been well for many years and I love sipping my tea, however lately some strange things have been happening, which because I am well aware of my food addictions, I recognise the same behaviour. So in relation to caffeinated black tea I was noticing the following…

And if all that wasn’t enough to get my attention, then a major sign happened…

I was visiting a friend and it was late afternoon about 4pm and she made a really strong pot of tea, I enjoyed it at the time and thought nothing of it. But later that night, I was still lying awake at 1:30am and wondering what was wrong with me. Normally I am quick to fall asleep and I go to bed no later than 10pm.

The next few nights too I kept waking up throughout the night and, which is so unlike me, I am usually a really good sleeper – out like a light until the appropriate wake up time. And I was really, really thirsty, all the time.

So I thought I would stop with the black tea for a while and just monitor the progress and while it’s only been a few days here is what I have noticed:-

All this and it has only been a few days!

Now you might say well it’s pretty obvious that you just were not drinking enough water along with the tea and this is completely true. Good spotting! Maybe even just drinking it too late in the afternoon. All true as well.

However I guess the thing is with all my food addictions, I wanted to get to a place in my life where I don’t have to consciously think of what I can and can’t have at every meal/beverage choice time. It’s exhausting and tedious.

“Do I allow myself this time or not? Maybe just this one this time and then no more?”

Which sounds incredibly sensible but then ‘the sneak’ happens (read The Sneak story here) where before you know it, you are having six a day and choosing it before other foods/drinks and it all gets out of hand. This is what addiction does to you. Well it does to me anyway.

So my preferred method is to just set a rule – no caffeinated tea – and the rest just flows, seamlessly, effortlessly. Just like it did with my weight loss when I said no to all of my addictive foods and replaced them with super yum alternatives that didn’t send me into a tailspin. (I didn’t do it all at once but assessed each food over time.)

Anyway, following my little experiment I am feeling much better for it. I still have my hot chocolate to drink if I feel like something ‘milky.’ Am I missing my little caffeine buzz? Maybe a little but the downside was getting to the point of being downright painful, so it’s not an even trade.

At this stage I don’t know if I will go back at all or if I do, it might have to be with strict guidelines – one cup a day only or one only on a Sunday. I always knew for me that tea was mildly addictive, but I thought I could manage it. Obviously it had other ideas and did the old smack down to show me whose boss.

Love to hear your caffeine stories whether it’s coffee, tea, cola or the ‘energy’ types of drinks, heart palpitations anyone??

Stay tuned; I will let you know if I manage to keep it out of my life for good. 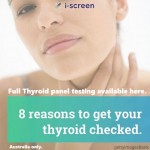